Nico Bulder was born in 1953 near The Hague in the Netherlands, as the youngest son of painter/advertising designer H.C.J. Bulder. He was raised, as it were, with a paint brush in his hand.

At the age of 6, Nico and his family moved to Apeldoorn on De Veluwe, in the east of the Netherlands, which is the heart of Dutch wildlife and nature. His passion for all facets of nature was born in this beautiful and exciting environment.

Thanks to all the close encounters he had with wild animals and in combination with his artistic genes, his profession and vocation became very clear: to be a wildlife painter and illustrator. 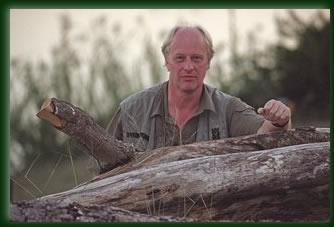 Throughout the years, Nico has been very successful in illustrating several books and magazines. Nico has exhibited his paintings hundreds of times in and outside the Netherlands. For more than 15 years, Nico gives art classes in his studio, to small groups of very enthusiastic and committed students.

Nico lives in the heart of the wildlife area in the Netherlands, together with his wife Yvonne, a wildlife photographer, and their son Kevin, who is studying wildlife management, and many pets, for more than 20 years. Their neighbours, red deer, row deer, red foxes and wild pigs, give him the inspiration that he embodies on canvas with oil paint in such a unique way. The magnificent results can be seen in the Dutch wildlife oil paintings.

For the past five years, Nico and his family spend several months a year in the African bush, where Nico gets his inspiration, and Yvonne a beautiful set of photographs. The results of all their trips and close-encounters with wild animals can be seen in the African wildlife oil paintings.

Nico’s personal mission is to create a very special series of twelve paintings called, "The Message" – a special message from a special artist.

© Nico Bulder - all paintings & photographs are copyright protected and may not be reproduced without prior written permission. Some oil paintings are available, if you'd like to arrange a viewing, please don't hesitate to contact me.